The PRIMUS data release 1 (DR1) redshift catalog includes 216,161 entries, with 16 fields (or tags) per entry. This page provides a description of the included tags in the fits catalog. 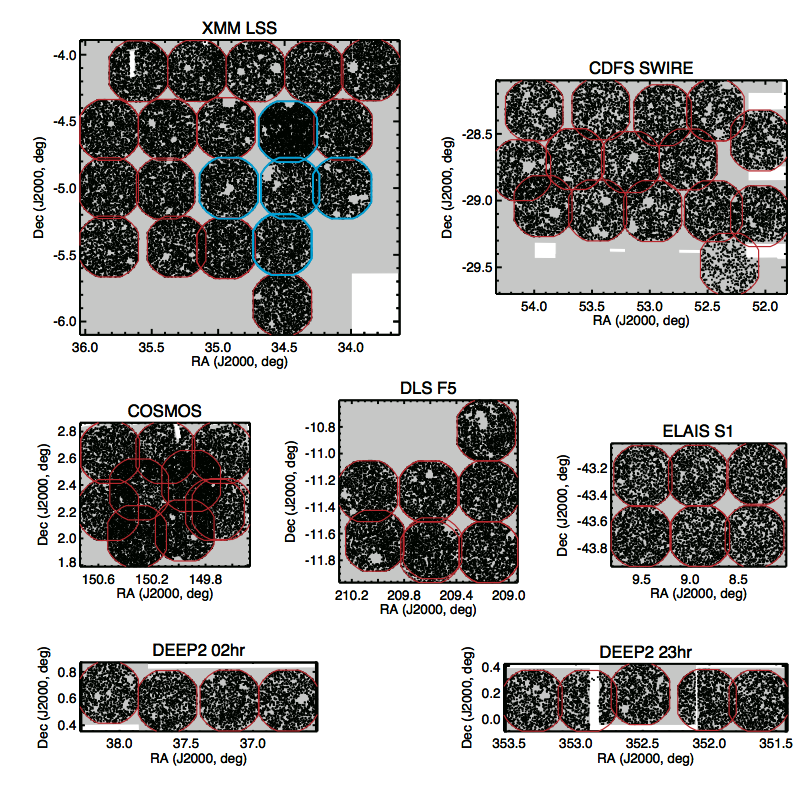 PRIMUS coverage of the various science fields targeted. Grey shading indicates the area surveyed by photometric catalogs used for targeting, black crosses are PRIMUS targets, and red lines show the outline of the observed PRIMUS slitmasks in the ﬁeld. The area outlined in cyan in the XMM-LSS ﬁeld is the SXDS region; see Coil et al. 2011 for details. Only 20% of the PRIMUS targets are shown here for clarity; the actual sampling density is five times higher than shown. This figure is taken from Coil et al. 2011 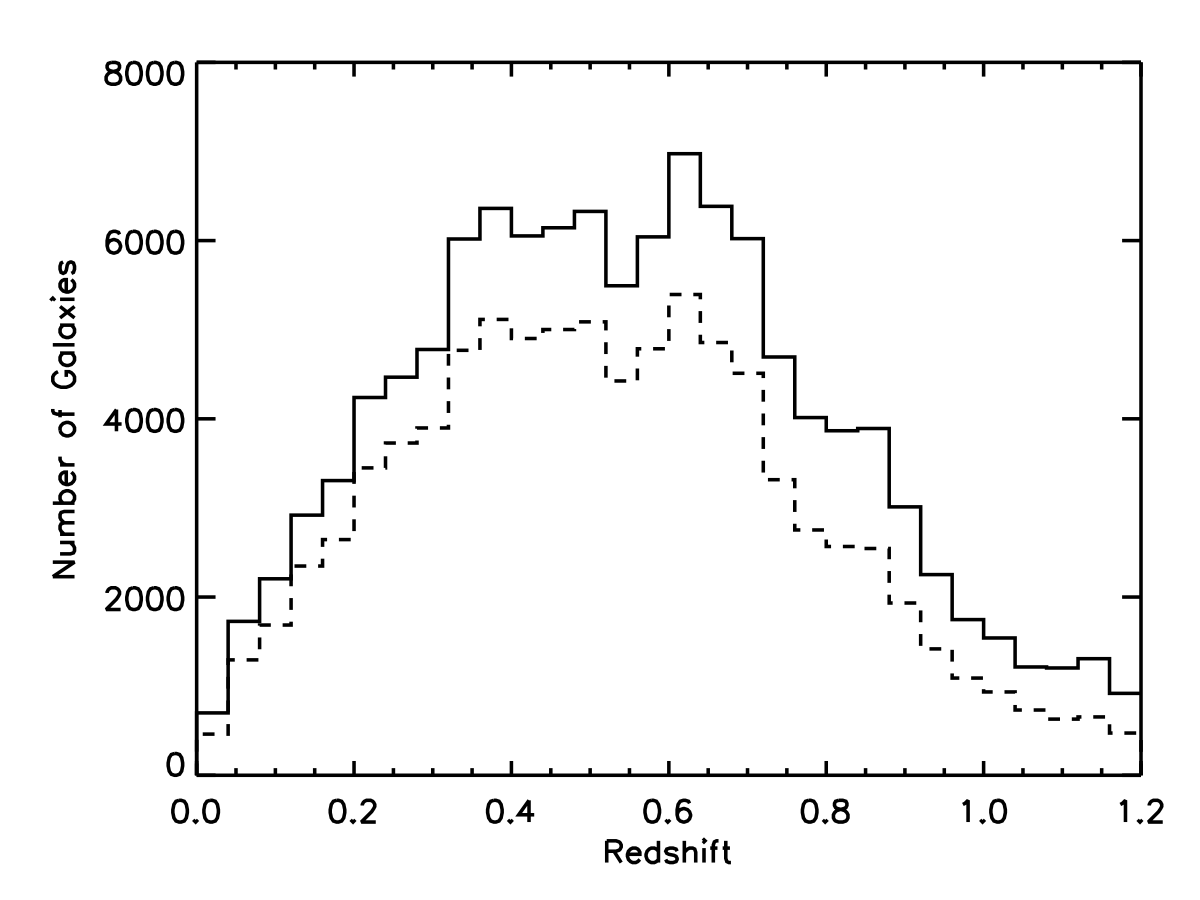 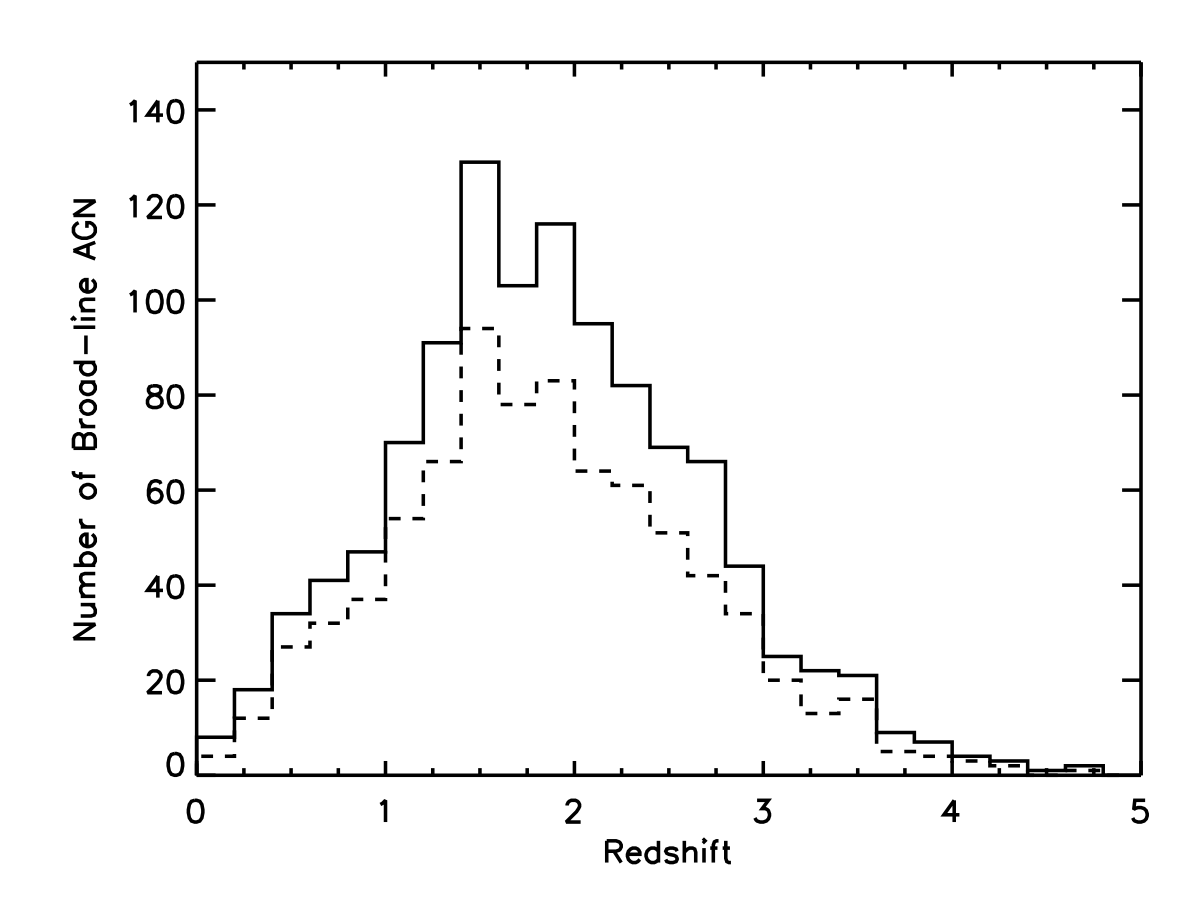 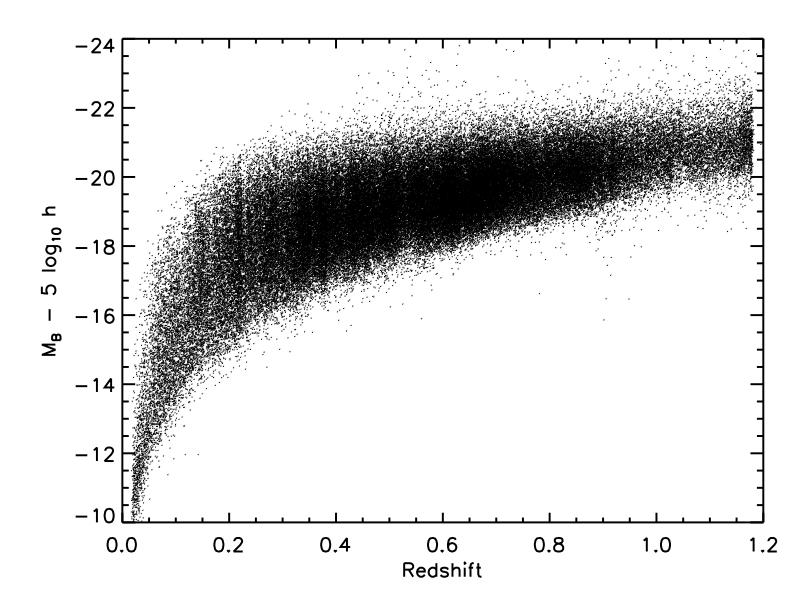 Absolute magnitude versus redshift for 120,050 PRIMUS sources (galaxies and AGN) between 0<z<1.2 across all of our science fields.

This catalog is line-matched to the DR1 redshift catalog and contains photometric magnitudes and errors. We used existing photometry in each field to choose targets for spectroscopy. As the imaging was taken from several different sources (using different cameras on different telescopes), it is not expected to be perfectly homogeneous. Table 4 of Coil et al. 2011 lists the optical imagining used for each field, in addition to the telescope and camera that it was taken with, as well as zeropoint offsets that were applied, and the reference or source of the data. The zeropoint offsets used in this catalog have been calibrated independently from the public catalogs (see details in Coil et al. 2011). We adopt a minimum error floor to the photometry in each ﬁeld, between 2%-10% in each band, which is used during redshift determination. For catalogs that were on the Vega system, we applied Vega-to-AB corrections as listed in the table. Catalogs that were on the AB system did not require corrections.

We thank the CFHTLS, COSMOS, DLS, and SWIRE teams for their public data releases and/or access to early releases. This catalog includes data gathered with the 6.5m Magellan Telescopes located at Las Campanas Observatory, Chile. We thank the support staff at LCO for their help during our observations, and we acknowledge the use of community access through NOAO observing time. Some of the data used for this catalog is from the CFHTLS public data release, which includes observations obtained with MegaPrime/MegaCam, a joint project of CFHT and CEA/DAPNIA, at the Canada-France-Hawaii Telescope (CFHT) which is operated by the National Research Council (NRC) of Canada, the Institut National des Science de l'Univers of the Centre National de la Recherche Scientifique (CNRS) of France, and the University of Hawaii. This work is based in part on data products produced at TERAPIX and the Canadian Astronomy Data Centre as part of the Canada-France-Hawaii Telescope Legacy Survey, a collaborative project of NRC and CNRS. We also thank those who have built and operate the Chandra and XMM-Newton X-Ray Observatories. This research has made use of the NASA/IPAC Infrared Science Archive, which is operated by the Jet Propulsion Laboratory, California Institute of Technology, under contract with the National Aeronautics and Space Administration.

Any use of this photometric catalog should cite the relevant photometric papers from Table 3 of Coil et al. 2011.

For any publication making use of data included release, please refer here for the relevant references and acknowledgments.

Any questions regarding PRIMUS or DR1 should be directed to Alexander Mendez (ajmendez@ucsd.edu).